The Messiah from Alexandria 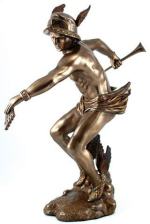 Suppose a new Bible translation had the second chapter of Matthew begin like this: "Now when Yahshua the Messiah was born at Athens Grecia in the days of Alexander the Great, behold there came wise men from the east to Olympia, Saying, ‘Where is He that is born king of the Greeks? for we have seen His star in the east, and are come to worship Him. When Alexander had heard these things, he was troubled, and all Olympia with him.’"

If you read such a translation you would be troubled, too. "My Bible says the Savior was Hebrew, born of the tribe of Judah at Bethlehem!" you would say. "That translation is wrong! The Greeks were pagans. He wasn’t Greek nor was he born among Greeks." You would be absolutely right. Now let’s look at this passage as it appears in the King James Version: "Now when Jesus was born in Bethlehem of Judaea in the days of Herod the king, behold, there came wise men from the east to Jerusalem, Saying, Where is he that is born King of the Jews? for we have seen his star in the east, and are come to worship him. When Herod the king had heard these things, he was troubled, and all Jerusalem with him."

Now the facts are right, expressing the Hebrew heritage and birth of our Savior. But one problem remains. "Jesus" is a Greek name. It is as out of place in the setting of Hebrew Israel as the Hebrew Savior would be if born in Greece – to be king of the Greeks.

Our Savior was a Hebrew, born of a Hebrew mother. He had a Hebrew family. He spoke Hebrew, lived the Hebrew culture, kept and taught Hebrew laws, had Hebrew followers, and quoted from the Hebrew Scriptures. So what is He doing in our Bibles with a Latinized-Anglicized-Greek name? And why, being a Hebrew, is He referred to by the purely Greek title "Christos" rather than the Hebrew "Mashiyach" ("Messiah")? One might argue, that’s because ours is an English Bible, not a Hebrew one.

If that is true, then why is the Greek "Christ" and its possessive "Christ’s" found 570 times in our ENGLISH Bibles, while the original, Hebrew-rooted "Messiah" appears a mere four times? Others may say, well, this just shows that the New Testament was originally inspired in the Greek. Not true, and we can cite myriads of reasons that the New Testament was written in Hebrew or perhaps Aramaic. But that still does not explain why the Greek title Christ, meaning "anointed," remains untranslated in our ENGLISH versions.

Was the New Testament written in Greek? Consider. The Jews of the Savior's day spoke Hebrew (or some say its sister language Aramaic). They held nothing but animosity for the heathen Greeks and the Hellenization policy of the Seleucid rulers. Why would the Hebrew Apostles be writing in Greek under these circumstances and social tensions? What average Hebrew could or would want to read Greek writings (even if the Apostles could write Greek, which most could not)? Some Alexandrian Hebrews had resettled in Judea and did speak Aramaic.

Josephus, the eminent  first-century Hebrew priest and historian – who said he far exceeded the average Hebrew in learning – wrote, "I cannot pronounce Greek with sufficient exactness..." (Antiquities of the Jews, 20:11:1). If this eminent priest and scholar could not speak Greek, how could most of the common Hebrews in Judea?

Yahshua sent the l2 Disciples "not to the Gentiles [Greeks included], but to the lost sheep of the house of Israel," Matthew 10:6. Obviously, these Hebrew Disciples writing for Israelites wrote in Hebrew – so the average Hebrew would understand. To think they would be writing in Hebrew but inserting Greek substitute names for the Father and Son is absurd. On the contrary. They would use the personal Names first revealed from On High to the Hebrew patriarchs in the Hebrew language long before the Greek language even existed! (see Gen. 4:1, 26)

Yahweh's personal name is known and accepted in most religious arenas and the latter "j" did not exist at that time and is not a part of the Hebrew alphabet. This would then eliminate Jehova and Jesus. Yahshua bears the Fathers name and Yahshua means Yah's salvation.