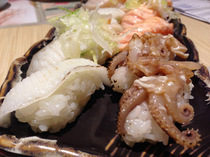 Today there is a push to eat more of the foods that Yahweh has told man that they should not eat. On many of the popular food/cooking shows we see this to be very evident. As a matter of fact, pork has been heavily marketed as the new "white meat." As many may know the term "white meat" has always been used to refer to the breast of what is called poultry, mainly chicken or turkey. So pork now being called the new "white meat" would be a very radical departure. Additionally, there are the so called exotic foods such as "sushi" that is made using the raw uncooked flesh of fish and certain types of seaweeds that are sea fungi and parasitc.

What does the scripture tell us? Yahweh has certified certain foods acceptable and others unacceptable for our consumption. How in important is this to worshipping Yahweh? It was that way at creation and still remanins that way today. Yahweh's laws about clean and unclean animals, fish, brids, insects, and even dead creatures are found in His Word. Just as with the Ten Commandments, we can see these laws operating long before they were reiterated to Yisrael and handed down to Moses on stone tablets. They are also still enforced in the New Testament.

Look at plants, for example. In Genesis 1:29 Yahweh told Adam and Eve at the beginning of creation, "Behold, I have given you every herb bearing seed, which is upon the face of the earth, and every tree, in which is the fruit of a tree yielding seed; to you it shall be for meat [food]." Later, in His covenant with Noah, the Creator stipulates that the green plant is given for food (Gen. 9:3). Yahweh limited edible plants to those that are green and propagate by seeds. Those plants that lack either chlorophyll or seeds, or both, are called into question — including fungi such as mushrooms as well as various parasitic plants. Another example in which we see clean food laws in operation long before Sinai is in Yahweh’s instructions to Noah. Yahweh told Noah that clean animals were to go aboard the ark by sevens, but he was to limit the unclean to only two, Genesis 7:2. Noah obviously had to know the difference because of the clean food laws. Peter knew the difference as well, as we see in his reaction to his own vision in Acts 10.

The laws of clean and unclean food are like the moral laws — they have been in effect since the beginning of creation. Therefore, we cannot brush them off with the argument that they were merely "Mosaic" and given only to ancient Israel.

Knowing What Is Clean And Unclean

Parting the hoof and being clovenfooted means the same. A clovenfoot is a split hoof of two toes. Chewing the cud is the process of casting up and re-chewing of food. These are the two criteria that qualify animals that can be used for food. Leviticus 11 lists several animals that do not fit these qualifications. These animals include the camel, rabbit (coney), and swine (pig). The swine (Heb. Chazir) is one the most gluttonous animals on the earth. This animal has been held sacred by the Greeks, Romans, and Anglo-Saxons. Yahweh also prohibited us from touching their carcasses.

For aquatic creatures to be fit to eat, they must have both fins and scales. One school of thought explains that marine animals without fins and scales tend to be bottom feeders, consuming the effluent that sinks to the mud. Having this in mind, we can perceive the reason Yahweh prohibited these marine species. Aquatic life unfit for human consumption includes shrimp, lobster, oysters, clams, crabs, and catfish. Modern science is now finding dangerous levels of harmful, heavy metals like mercury and lead in the flesh of many of these creatures. Yahweh certainly knows best!

The first unfit bird that is mentioned is the eagle (Heb. nesher, from nashar). Nesher means to cut or tear in pieces. From this definition we can see that the eagle is a raptor. The Ossifrage (os – bone, frango – break) probably signifies the black eagle. Among the Greeks and Romans the eagle was held sacred, and is represented carrying the thunderbolts of Jupiter. The vulture (Heb. daah) from a root meaning "to fly," may be more probably rendered kite. Daah is different from the vulture. The Hebrew word daiyah indicates the vulture. The word for kite in The New Strong’s Exhaustive Concordance of the Bible is No. 344, ayah, and it denotes a species of the hawk. The interesting fact that surrounds these birds is that they are all birds of prey or scavengers.

1Timothy 4:4: "For every creature of Yahweh is good, and nothing to be refused, if it be received with thanksgiving."

Proper Understanding –A "creature of Yahweh" that meets clean food qualifications is defined in the next verse: "For it is sanctified by the Word of Elohim and prayer." It is the Word that sanctifies or sets apart those animals (listed in Leviticus 11 and Deuteronomy 14) that Yahweh says we may eat. Without any further study it should be clear as crystal that Paul is not promoting the eating of ceremonially unclean animals that Yahweh has ordained as abominable for mankind. Who would argue that rats, bats, lizards, scorpions and skunks are good for food?

Yahweh’s Word prohibits consumption of both fat and blood (Lev. 3:17; 7:23, 26-27). The fat of the animal was offered to Yahweh in sacrifice (Lev. 3:16). It belongs to Him. The life of the animal is found in its blood (Lev. 17:10-14). Both fat and blood of the sacrifice were treated separately from the meat of the sacrifice and neither were eaten. Thus, it is necessary to remove all blood from the flesh of Scripturally clean animals before eating and to avoid eating residual blood.At the time of slaughter, rapid draining of most of the blood must occur. This process is unnecessary with fish, as very little blood remains in the meat of fish. Any remaining blood can be removed by soaking in brine. All flesh from land and sea must be completely cooked.

At all times do what is right and acceptable before Yahweh.