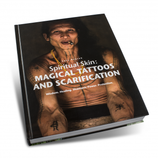 In the Book of Leviticus 19:28 reads: "Ye shall not make any cuttings in your flesh to the dead, nor print any marks upon you: I am Yahweh."

The term here "nor print any marks" is derived from two Hebrew words; kethobeth, meaning, "a letter or other mark branded on the skin" and qa'  aqa' meaning an incision or gash." This command would apply to any permanent marks upon the body, including tattoos.

Its instructive to note that Yahweh prefaces that these things are an abomination.

Thousands of years ago humans began to put markings upon there bodies. In some instances it was personal, but in most cases it was always associated with deviancy, magic, or rebellion. The Latin word for tattoos is "stigma" - which is the distinguishing mark cut into the flesh of a slave or a criminal, and was considered a mark of disgrace or reproach. By the early 1900s public opinion against tattos was so strong, that tattooed persons were considered freaks and found mostly in side shows and circuses.

For thousands of years tattoos have been associated with shamans or magic-men, Baal worship, occult mysticism, and demonism. A shaman is an intermediary between the natural and supernatural worlds, he is in direct contact with evil spirits. Tattooing was often a magical rite linked to scarification and blood letting, and tattooing process involved complex rituals and taboos, known only to the shaman and in some cases the tattoo artist.

In tattooing, the skin is punctured and the blood is drawn. Licking the blood during tattoo operations is not unknown. The puncturing is considered an "opening of inlets for evil to enter." Therefore, tattoos were channels for demonic possession. Even today, certain tattoo artists burn incense and light candles during tattoo operations, while others "allow demons to guide the tattoo needle over the client's body."

One of the oldest and most common satanic practices is cutting of the flesh or blood letting. (this also include tattoos, remember the shaman) The term "blood-letting" originates from the word "let" - "to allow to pass, go or come." Hence blood-letting literally means to come or to pass.

Here are a few descriptions of the tattoo procedure. Keep in mind that they are all from pro-tattoo sources.

Thousands of years ago early tattoos were done in the following way: "People would take the teeth or bones of animals and put cuts or punctures into their skin and then rub soot of varying shades into the punctures or cuts." (Sean Chris Miller, The Body Art Book: A Complete Illustrated Guide To Tattoos, Piercings, Other Body Modifications, pg. 28)

Also from the same publication is the following quote: "You will see little drops of blood emerge from the freshly tattooed spot. How much you bleed has a lot to do with personal physiology as well as with outside factors like the presence of alcohol in your system"

"The reasons why puncturing the skin should be regarded with some degree of awe are not far to seek, for in the first place, there is the drawing of blood, which to the savage world over is full of significance as a rejuvenationg and imortalizing factor. There is, in addition the opening of numerous inlets for evil spirits to enter."

(Wilfed D. Hambly, The History Of Tattooing And It's Significance..Pg 233)

"Tattooing is about personalizing the body, making it a true home, and fit temple, for the spirit that dwells inside it.....Tattooing therefore, is a way of keeping the spiritual and material needs of my body in balance."

"The actual tattooing process, which involved complex ritual and taboos, could only be done by priests and was associated with beliefs which were secrets known only to the members of the priestly caste."

So remember, these are not quotes from anti-tattoo writers, but from what could be called "hard core" supporters of tattooing.

One of the arguments made by the carnal minded believer is that Leviticus 19:27 forbids hair cuts. What Levitcus 19:27 is pointing out is "rounding the corners of your head" and "marring the corners of the beard," these were heathen practices. One such practice was to cut the hair so that the hair resembled a celestial globe. It is called a "tonsure" a practise of the heathen in honor of their mighty ones. The cutting of the flesh was demonstrated by the prophets of Baal on Mount Carmel. It should not be forgotten that the demon possessed man in Mark 5 was prone to cutting himself with stones.

Cutting and self-flagellation is still practised today by Muslims during their festival of Muharram, and by some ultra orthodox Jewish sects. In short, the injunctions in Leviticus 19:26-28, are a strong condemnation of heathen practices - witchcraft, astrology, cutting, tattooing, tonsures, mohawks, etc.

No where in scripture does Yahweh instruct man to scarify themselves or to blood-let, He in fact warns against it

Beware - the tattoo procedure is a fashion of the satanic practice of blood-letting or cutting of ones flesh. Rubbing a little ink or pigment in it does not change - the fact you are cutting your flesh - you are practicing blood letting.

Know Yahweh and what is acceptable onto Him.