The Feasts And The Final Days 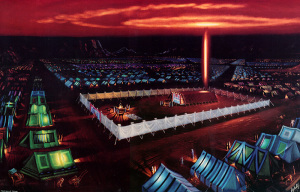 The seven annual holy days reveal Yahweh's plan of redemtion. They are a sign between Him and His people. These festivals are to be observed as a Sabbath and are to impress upon His people the coming Kingdom where the chosen will have positions of authority in His realm.

Our lives are a prepartion to rule with the Messiah when He returns. His annual festivals are a time of gathering to rejoice and celebrate the blessings Yahweh has given us. The Feasts are, in fact, the key to the future Kingdom. Understanding what the festivals of the Bible are, is understanding the plan of salvation.

Yahweh's holy times begin with Passover in the month of Abib, when the green ears of barley appear. In the seventh month are four high Sabbaths, which wind up the harvest season, ending with the Last Great Day of the Feasts. Yahweh's plan of redemtion is tied to His harvest festivals, which He delineates as occuring three times (cycles, rhythmic occurances) during the year. Yahshua is the first fruits of the resurrection. Yahweh's people are also a type of harvest ( James actually Iakob 1:18).

Passover commemorates the deliverance of His physical people, Yisra 'el from the bondage of the Egyptians. The Feast of Tabernacles reminds us that Yisra 'el lived in tents or booths before they were brought into the promised land.

Pentecost or first fruits points to the harvest of those called out of the world now to help Yahshua rule for a thousand years. Also known as the Feast of Weeks, this time commemorates the giving of the law at Sinai, which Yisra'el ratified under the Old Covenant. In the Second Testament, the Holy Spirit was sent to the earth to enable us to keep the law. THIS BECAME KNOWN AS THE NEW COVENANT.

In Acts 2:39, Kephas (Name Anglocized to Peter) confirms that the called out ones will be heirs in the Kingdom. The ekklesia (incorrectly rendered "church") is being called out of the world now to become kings and priests under the comming rule of the Messiah. We are not yet in the Kingdom, but those in the ekklesia are heirs of the Kingdom, joint heirs with the Messiah, and are in training now to help rule in the righteous government of the Heavens brought to this earth.

Many prophets were given visions of the latter days and future deliverance of Yahweh's people, which will be much greater than the deliverance of the 2-3 million Yisra'elites from Egyptian bondage. Yirmyah (Jeremiah) gives the reason. "Wherefore has Yahweh pronounced all this great evil against us, or what is our sin that we have committed against Yahweh our Elohim? Then shall you say unto them, "becuase your fathers have forsaken Me" says Yahweh, "and have walked after other deities, and have served them, and have worshiped them, and have forsaken Me, and have not kept My law, and you have done worse than your fathers; for behold, you walk everyone after the imagination of his evil heart, that they may not hearken unto Me...Yermyah (Jeremiah) 16:10-12.

THEY TEACH AN EASY ROAD

When people today read the prophecy against people of Scripture, they have the idea that it refers, in the modern context to someone else. Christians do not realize that this prophecy is against perverting Scriptures today and forsaking Yahweh by walking after other deities and serving them..MIGHTY ONES called GOD AND LORD (BAAL) Yermyah (Jeremiah) 23:27.

Most nominal churchgoers would declare they indeed worship the mighty one of the Bible. However, when clear explicit verses are presented such as, Exodus 23: 11-17 commanding Yahweh's people to keep the seventh day Sabbath, not to utter the names of pagan deities, to keep the annual holy-days, they will quickly shrug it off and say that it does not make any difference. Finding shortcuts is a comman human trait, we always look for the path of least resistance. When it comes to "true worship" Yahweh does not offer any shortcuts. His is a doctrine of self-discipline, of overcoming our carnal nature, and viewing life from His perspective. He expects us to keep His Sabbaths and Holy-days throughout all generations.

"Therefore, thus says Yahweh, Elohim of Hosts, Oh My people that dwell in Sion, be not afraid of the Assyrian; he shall smite you with a rod, and shall lift up his staff against you, after the manner of Egypt." Isaiah (Y'shayah) 10:24

Hebrews 12:22-24 clearly shows that the true people of Yahweh are referred as those dwelling in Sion. These saints will undergo a future persecution and tribulation under the hand of the Assyrian as did acient Yisra'el. They will be delivered with a mighty hand, just as were the Yisra'elites from Egyptian bondage. It is during this time that the saints will be living in tabernacles just before Yahweh intervenes. "And it shall come to pass in that day, that Yahweh shall set His hand again the second time to recover the remnant of His people, which shall be left, from Assyria, and from Egypt, and from Pathros and from Cush, and from Elam and from Shinar, and from Hamath and from the islands of the sea. And He shall set up an ensign for the nations, and shall assemble the outcasts of Yisra'el, and gather the dispersed of Yhuwdah from the four corners of the earth." Isaiah (Y'shayah) 11:11-12.

Now let us read verse 16; "There shall be a highway for the remnant of His people, which shall be left from Assyria; like it was to Yisra'el in the day that he came up out of the land of Egypt." Isaiah (Y'shayah) 11:16.

DISOBEDIENCE HAS A PRICE

The world is not obediently keeping the Feasts Days as Yahweh commands. Here is the result!!

Howl Ye; for the day of Yahweh is at hand; it shall come as a destruction from the Almighty. ...Behold the day of Yahweh comes, cruel both with wrath and fierce anger, to lay the land desolate: and He shall destroy the sinners thereof out of it. For the stars of heaven and the constellations thereof shall not give their light; the sun shall be darkened on his going forth, and the moon shall not cause her light to shine. Isaiah (Y'shayah) 13:6,9-10.

Yahshua himself spoke of this time in Matityyahu (Mathew) 24:29. Notice that he begins in verse 21 stating "For then shall be great tribulation, such as was not seen since the beginning of the world to this time, no, nor ever shall be." Verse 24 shows that the elect, or chosen people, are still on the earth, for he speaks of false messiahs, and false prophets who will show great signs and wonders that will be so astounding and real, that if it were possible, that even the elect would be deceived.

Isaiah(Y'shayah) 60 tells of the regathering of His people from all around the world. He promises untold glory for those who remain steadfast. In Isaiah (Y'shayah) 61 we find the same verse that Yahshua quoted when He started His public ministry. The Spirit of Yahweh is upon me; for Yahweh has annointed me to preach the Good News unto the meek, he has sent me to heal the broken hearted, to preach deliverance to the captives, and recovering of sight to the blind, to se at liberty them that are bruised, to preach the acceptable year of Yahweh."

Luke 4:18-19. Yahshua stopped right in the middle of the second verse. But it was obvious that He was speaking of the Sabbatical year in this prophecy.

Yahweh always brings things about according to His time table. Trumpets, Atonement, and Tabernacles are awaiting fulfillment, and Yahweh undoubtedly will be right on schedule. His feast days help us to remember His plan of redemption, which we are reminded of three times during the year. The fall festivals begin a time of tribulation, and foreshadow the deception of the false prophet, and the iron grip of the man of sin. These festivals go on to remind us of the coming Kingdom of Yahweh, where His law and government will be the remaining and only law throughout the world.

Dwelling in tents or booths as we are commanded of Yahweh reminds us that we are but surjourners in this world. Our real goal is to be in that Kingdom, wherein is righteousness and where the entire world will be keeping His sabbaths and His laws. Isaiah (Y'shayah) 66:23. We are merely passing through this present veil of tears, knowing that a tabernacle represents our temporary dwelling on earth.

For the leaders of this people cause them to err, and they that are led of them are destroyed. Isaiah (Y'shayah) 9:16

Those of us alive today have the greatest opportunity on the face of the earth to worship Yahweh in spirit and in truth. We have more resources to prove the truth of the Bible than any generation before us. At our fingertips are concordances, lexicons, commentaries and various translations. Yet people are more ignorant of the Scriptures than in Jeremiah's (Yermyah's) time.

The Feast of Tabernacles is a taste of the Kingdom on earth. You can have a foretaste of that Kingdom today.