They Say!!!   By Elder Errol Garrick 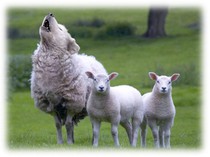 In the book of Jeremiah (Hebrew - Yirmiyahu) 3:1 starts with the words "They Say." This chapter speaks to the unfaithfulness of Israel before Yahweh. Its important to remember that when Yahweh's commandments were codified with Moshe (Moses) at Sinai He made it clear that it was for all men, not just for the people of Yisrael.

The chapter reveals the sin of Yisrael in allowing themselves to be led away into idolatry by the nations around them. Something they were warned against by Yahweh. As we come forward to today, we see that the nations that are not seeking after Yahweh are still trying to teach the people of Yahweh the ways of the heathen.

From the time of the deception of the woman in the garden, the lies began to permiate the minds of men, Solomon pointed out that there is nothing new under the sun. This is true of Yahweh's Truth, such also applies to the lies of the father of lies.

Thousands of years ago Yahweh inspired Jeremiah (Yirmiyahu) to write about what they had to say. The people were convinced to worship the queen of heaven - also known as Astare, the wife of Baal or Moloch. Back then the male and female pair symbolized nature's generative powers, from whence prostitution was practiced in her worship. Crescent shaped cakes were offered to the moon.

Hmm!! Not much has changed has it? They want the people of Yahweh and all men to go into worship on "Earth Day" and all the other days that have been set apart to worship their "Mother Nature." As a wolf in sheeps clothing, they say come and let us decorate the trees with bright balls and the sunburst on top. It seems wonderful and nice, playing to the thoughts of the emotional man that thinks and moves in the flesh.

The lore of their words are just as strong today as they were in the days of Yirmiyahu (Jeremiah). Let's take a look. In Yirmiyahu (Jeremiah) 44:16 "As for the word that thou hast spoken unto us in the name of Yahweh, we will not hearken unto thee." 44:17 " But we will certainly do whatsoever thing goeth forth out of our own mouth, to burn incense unto the queen of heaven, and to pour out drink offerings unto her, as we have done, we, and our fathers, our kings, and our princes, in the cities of Judah, and in the streets of Jerusalem: and then we had plenty of victuals, and were well, and saw no evil."

44:18 "But since we left off to burn incense to the queen of heaven, and to pour out drink offerings unto her, we have wanted all things, and have been consumed by the sword and by the famine."

What gaul to have such speech before Father Yahweh. This is the power of of deception. Today the world believes that what they have heard is true and they believe that the mighty ones they serve provides all things for them. This exemplifies the power of "they say."

What does Yahweh have to say about this?

Jeremiah 7:22-23 " For I spake not unto your fathers, nor commanded them in the day that I brought them out of the land of Egypt, concerning burnt offerings or sacrifices."

"But this thing commanded I them, saying, Obey my voice and I will be your Elohim, and ye shall be my people: and walk ye in all the ways that I have commanded you, that it may be well unto you."

The words of Yahweh are Spirit and Life. It is the real and true Mckoy, no lies, just straight talk. Yahweh is the one, the only one with say. Serve Him and keep His commandments, and it shall be well with you.

Join us in keeping Yahweh's statutes and commandments